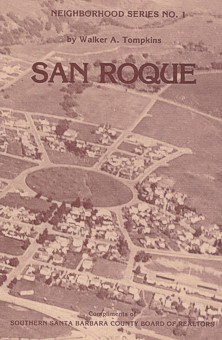 Few residential neighborhoods of Santa Barbara can boast the rich historical background of the San Roque and Rutherford Park areas. Ten thousand years ago the area bounded by Ontare Road, Foothill Road, Alamar Avenue and State Street was an open expanse of treeless grassland, sloping up to the knees of the foothills and bisected by the jungled course of San Roque Canyon.

Now a built-up, economically stabilized suburb, it is admired for its sweeping curved streets, its luxuriant landscaping, and its harmonious blend of many architectural themes – Spanish Colonial, English Tudor, French Normandy, California Redwood, Italianate and American Colonial, mostly built since 1925.

If you take the San Roque Canyon trail northward from Stevens Park, a half mile beyond the twin-arched Foothill Road bridge you will come to a grove of ancient oaks and sycamores where Chumash Indians gathered long before Columbus discovered our continent. Alongside the trail you will see an outcropping of sandstone which is polka-dotted with deep, funnel-shaped mortars. Here Chumash squaws, using stone pestels, ground their acorn harvest to obtain a powdery meal which, when leached to rid it of its lye content, produced a tasty gruel to go with their seafood and wild game diet.

When the first white men arrived in 1769 with Governor Portola, they camped at the mouth of San Roque Creek, which they named to memorialize the patron saint of invalids, Saint Roque, a Carmelite friar of the 14th Century. Thus our neighborhood got its name.

Following the founding of Santa Barbara’s Royal Presidio in 1782 and the Mission in 1786, the “King’s Highway” or El Camino Real linked the missions from San Diego to Sonoma. El Camino Real crossed the San Roque district from east to west on what is now outer State Street. All the land between Alamar Avenue westward to Kellogg Avenue was granted to the Mission fathers by King Carlos III of Spain, to use as grain fields or vineyards. When Mexico overthrew Spain in 1822, the missions were returned to the Indians and the ex-mission lands, including San Roque, became public domain.

Few Indians survived to greet the Americans in the late 1840s; a few were huddled together on a reservation at Cieniguitas under the guardianship of an Irish sheep rancher named Thomas Hope, for whom Hope Ranch is named. From April 1847 until September 1848, Santa Barbara was under military occupation by Company F of Stevenson’s Volunteer New York Regiment. The regiment was composed largely of rough hoodlums from the Bowery and Hell’s Kitchen, and following the Gold Rush of ’49 a number of these uncouth ex-soldiers elected to remain in Santa Barbara permanently. Their ringleader was a former sergeant, Jack Powers, who became one of California’s most notorious bandits and gamblers of the 1850’s.

Ostensibly Powers worked as a hostler for the wealthy De la Guerra family; actually he used their horses to commit highway robbery on El Camino Real. Powers selected San Roque Canyon on the ex-mission lands as his headquarters and built a barn and corrals near present-day Canon Drive and Calle Fresno. At that time the entire canyon was called the Arroyo Burro. Powers soon found out that his squatter’s claim actually belonged to Don Nicolas A. Den, grantee of the Dos Pueblos Rancho, who objected to Powers presence. After all means of evicting Powers and his gang failed, Den swore out a writ of ejectment for Sheriff W. W. Twist to serve.

Powers and his henchmen, who controlled Santa Barbara with a virtual reign of terror in the early 1850s, informed the sheriff that Powers would fight to hold his Arroyo Burro ranch. Upon hearing this, Sheriff Twist deputized a 200-man posse of local citizens, who gathered in front of the Aguirre Adobe at Anacapa and Carrillo Streets to be briefed for their assault on San Roque Canyon.

Several of Powers’ men rode into town to spy on the posse meeting. The sheriff shot and mortally wounded one of Powers’ lieutenants, while he himself was stabbed in the back. The possemen rode in hot pursuit of Powers’ escaping thugs, entering the canyon at today’s intersection of Ontare Road and State Street. They were met by a white-flagged courier who warned them that any posseman venturing north of a certain candelabra-shaped tree near the San Roque Creek ford would be shot. This cooled the ardor of the posse and it was years before Den succeeded in ousting Powers and his men.

A hundred years later county surveyor Owen H. O’Neill, working from land claim maps in the county courthouse, zeroed in on Powers’ “outlaw sycamore.” It may be seen today at 134 North Ontare Road.

Santa Barbara’s “decade of the desperado,” the 1850s, was followed by the stagecoach era, which lasted forty years. The historic Concord stages crossed the San Roque district via modern-day De la Vina and State Streets on their way to Lompoc or San Marcos Pass.

One of Santa Barbara’s most colorful pioneers, Dixey W. Thompson, arrived in 1858 and became a future owner of the Ontare Ranch which comprised the San Roque-Rutherford Park district of today. Dixey was born in Maine in 1826 and went to sea as a cabin boy at twenty, winding up as master of his own vessel by 1848, when he heard of the discovery of gold in California. Dixey joined the Gold Rush of ’49 but had scant success mining for gold, so he returned to the sea and made his home port on Santa Rosa Island opposite Santa Barbara. The island belonged to his relative, Captain Alpheous B. Thompson, one of Santa Barbara’s earliest Yankee settlers. After several years of shipping sheep and cattle from Santa Rosa, Dixey had made enough money to purchase two tracts of land, one in Ventura County, the other on the outskirts of Santa Barbara – the Ontare Ranch.

Dixey Thompson’s huge barns and corrals used to be landmarks near Hollister Avenue and Alamar, now Long’s Drugstore and parking lot. The barns were burned down in a spectacular fire in 1927 with a shocking loss of livestock trapped within. Thompson had blacksmith shops and other buildings at the intersection of Alamar and De la Vina, which became a watering place for Goleta Valley farmers hauling their produce to market. “Wilson’s Nook,” still standing, and other false-fronted buildings nearby were featured in many western movies during the era of the Flying A studios, 1913-1921.

Dixey Thompson raised beans and walnuts on his ranch. The bean harvests were exciting, with itinerant crews bringing in their steam engine, separator, cookhouse and bedroll wagons.

A man of great personal charm, Dixey Thompson was better known as a boniface than a rancher. He managed the original Arlington Hotel during the many years that Col. W. W. Hollister owned that hostelry. Old timers still remember how Dixey, mounted on a prancing Morgan stallion from his Ontare breeding stables, would ride down State Street backwards, to the delight of tourists. His silver saddle, now on display in the Historical Society museum, was a wonder of its age, long before “Hollywood cowboys” began showing off their saddles under preposterous loads of sterling.

Dixey was 77 when he fell victim to a flu attack in April, 1903. His widow, the former Nancy Swett of Maine, resided in the stately white colonial home at 1415 Chapala Street, now the office of the Southern Santa Barbara County Board of Realtors.

Thompson’s ranch flanking San Roque Canyon remained open agricultural land until the first subdividers began nibbling at the perimeter around World War I. Stephen Rutherford, after selling his Dos Pueblos ranch to an oil tycoon, in 1917 bought 123 acres between San Roque Road and Alamar Avenue and in 1923 laid out Rutherford Park. It consisted of a series of curving streets radiating from a center hub named Argonne Circle in honor of the battle in which his son Lawrie had been killed. Carrying on the Spanish nomenclature tradition of Santa Barbara, Rutherford called his streets “Calles”. His own elegant home still stands at 201 Calle Palo Colorado (redwood tree), so named for a Sequoia planted by him). Rutherford died there in 1939 at age 91.

The San Roque portion of Thompson’s ranch was developed in patchwork fashion between the two world wars but enjoyed its greatest housing boom in the 1950s. Hollister Avenue, now the thriving Northside business district, was an oil road between citrus groves. Its major landmarks were Bam’s Auto Court, now the site of a Sambo’s restaurant, and Kelley’s Korner, a mom-and-dad grocery at Hollister and La Cumbre Road which Lloyd and Berta Kelley operated, starting as a service station in 1934. Urbanization engulfed them in 1970, the last reminders of the “out in the country” days.

How many homeowners in San Roque Canyon today are aware that their lots occupy land once intended to be the fairways, roughs, and greens of the San Roque Country Club, incorporated in 1926? The depression wrecked this grandiose plan for a permanent greenbelt and in 1939 the southern tip of the golf course was deeded to the city. It is now the half-acre “San Roque Park” at Chuparosa and Canon Drives.

The northern extremity of the proposed golf links is now one of Santa Barbara’s prime recreation areas, 25-acre Stevens Park, named for Ralph Stevens, a prominent park superintendent. It joins the primitive canyon park lying north of the Foothill Road bridge where the prehistoric Indians used to harvest their acorn crop.

Another historic “first” for San Roque was the old Mountain View Auto Court at the southeast corner of Thompson’s ranch, thought to be the first “motel” ever built in California. Around 1920, motorists were usually plagued with flat tires and radiator boil-outs on the 100-mile journey from Los Angeles, which made Santa Barbara a convenient overnight stop. Mountain View offered sleeping cabins for a dollar a night, or a campsite for 50 cents which included use of restrooms and laundry. The site of the Mountain View Auto Court is now occupied by the Vagabond Motel at 2819 State Street.

Another early-day landmark to appear on Dixey’s property was the fire station at 3030 Hollister Avenue. The northern part of the ranch, abutting Foothill Road, was Comacho’s strawberry farm, which produced strawberries as large as billiard balls for retailing at Santa Barbara’s world-famous gourmet grocery, Diehl’s.

The burgeoning growth of the San Roque-Rutherford Park areas led to the establishment of Peabody Elementary School at 3018 Calle Noguera in 1928. To serve the Catholic families of the neighborhood, the San Roque parochial school was opened in 1937 on a block just west of Argonne Circle, the faculty consisting of school sisters from Manitowoc, Wisconsin. A small chapel which had served the U.S. Army’s Hoff General Hospital was moved to the school property on Calle Cedro and put to church use by Christmas of 1948. In 1953 Francis James Cardinal McIntyre, Archbishop of Los Angeles, divided the Old Mission Parish at Alamar Avenue and created San Roque Parish. A sisters’ convent was built that year at Calle Pinon and San Roque Road. By this time there were about 650 Catholic families in the neighborhood which led to the moving of the old army chapel to Calle Pinon for use as a parish house, and a new church in Spanish style was erected in 1962 at 325 Argonne Circle.

The potential purchasing power represented by these families was recognized by the business community of Santa Barbara, resulting in the explosive growth of the Northside business district flanking the south border of the San Roque suburbs. Modern shopping plazas mushroomed at Loreto, Broadmoor, San Roque (where a branch U.S. Postoffice was built), La Cumbre and Five Points, drawing many of the downtown merchants to newer buildings. State Street, which for a hundred years had dead-ended at Constance Avenue, was extended to a junction with De la Vina and took over Hollister Avenue as far west as the old “Wye” and the 101 freeway.

With shopping and banking facilities at their very doorstep, residents of San Roque feel they are living in one of Santa Barbara’s choicest residential neighborhoods, where investing in home or business property guarantees future security.

© Copyright 1980 by Santa Barbara Board of Realtors.