by Walker A. Tompkins 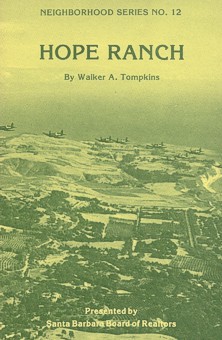 Our area is rich in California history. First written mention of it was made in Portola’s diary on April 20, 1769, as he marched across the mesa with 65 leather-jacketed soldiers. Here they were greeted by the friendly Canalino Indians from Cieneguitas (the area between the present Modoc Road and Highway 101). Evidence of Indian life in the Hope Ranch area goesback six to ten thousand years and the Cieneguitas area is particularly noteworthy. Artifacts, kitchen midden and burial grounds here have revealed evidence of all three of the Indian Cultures native to the Santa Barbara Coastal Plain – the Oak Grove, the Hunters and finally, the Canalinos. Evidence of other Indian villages has been found high on the bluff to the west of the present day beach park.

The first private owner of Hope Ranch was Lt. Narciso Fabregat of the Santa Barbara Presidio, who was called to Santa Barbara to fight the notorious pirate, Bouchard. Fabregat received the 3,382 acre grant from the Governor, Manuel Micheltorena, on May 16, 1843. The grant was known as “La Calera” (The Lime Kiln) as the Mission fathers had operated a lime kiln here earlier in the century to make the mortar for their extensive building, including the original Santa Barbara Mission. The ruins of the kiln are on Las Palmas and were uncovered and explored by a group of UCSB archaeologists in 1977.

In August 1845, Fabregat transferred his title to the land to Thomas M. Robbins, a storekeeper. In July 1846, Robbins added the additional 3,281 acre grant “Las Positas” to the ranch. This area meaning “Little Springs” was given to him by Pio Pico.

In 1861, Thomas Hope bought “Las Positas y La Calera” ranch from Robbins’ widow for the sum of $8,000. Hope, an Irishman, had immigrated to the United States when he was 16 and learned the sheep and cattle business in West Texas. He traveled to San Francisco, met and married an Irish woman, Delia Fox, and together they ran a profitable boarding house there during the early part of the
California mining era.

Remembering how he had been reminded of his native Ireland when he stopped at Santa Barbara on his way to San Francisco, Thomas Hope decided to return to the area as a sheep rancher. He drove a flock of 2,000 sheep to Santa Barbara in 1850, leasing land at first. By the early 1860’s, his flock numbered more than 5,000. Raising sheep proved to be a prosperous undertaking. The wool needed for soldier’s uniforms during the Civil War caused prices to soar. Sheep were also able to endure the droughts during the 1860’s far better than the cattle of the California ranchers. Thomas Hope became one of the wealthiest men in the county.

In October 1854, Hope was authorized to act as Special Indian Agent for the Indians at the Cieneguitas settlement. It was his duty to protect the Indians and their rights. He received no compensation for this duty. In 1873, he gave the county at 120-foot wide strip of land running all the way to Turnpike Road for a new road (now Hollister Avenue). When a deputy county surveyor began putting in stakes for another road which ran through the site of the Indian village, Hope objected. He sent the ranch foreman, an Indian leader named Juan Justo, to stop the survey at his property line. Hope followed and demonstrated his intention to stop the process by brandishing his shillelagh, after which he promptly galloped into town and turned himself over to the judge. He was fined $25 for obstructing a public servant in the commission of his duties and later paid an additional $1,000 for assault and battery when the surveyor filed a lawsuit. The road went through at a time when newspapers were filled with accounts of the Modoc Indian uprising in Northern California. Since County officials felt they had encountered a war during the survey, they named the road “Modoc.”

During the period of prosperity, Hope engaged the most prominent architect in the county, Peter J. Barber, to design a home. Known as “The Mansion” and costing $10,000, it was completed in 1875. Located on Nogal Drive, across from the Vieja Valley School, it was used until 1945 as the Hope Ranch Park Headquarters. In 1967, Mr. and Mrs. George Obern purchased the house and completely restored it. Today, the Thomas Hope House is an official County Landmark and is listed on the National Register of Historical Places.

Thomas Hope died in January 1876. In his will, he divided his ranch into two parts – half going to his widow, and the other half to his six children. At that time, his land extended from the present Hollister Avenue to the ocean, and from the present West Valerio Street to More Mesa.

In 1887, Delia Hope sold her western half of “Las Positas y La Calero” to the Pacific Improvement Company, a holding company for the Southern Pacific Railroad (owned by the “Big Four” – Mark Hopkins, Charles Crocker, Collis P. Huntington and Leland Stanford) for $250,000. Legend has it that she insisted upon the purchase price being paid in gold coins, and, sitting at a marble-topped table, she tested each coin for authenticity. The bank made good the $20,000 she set aside as inferior. Delia Hope’s sale of the portion of her land essentially marked the beginning of the development of the present-day Hope Ranch.

Originally, there was speculation that the Pacific Improvement Company was planning to build a large tourist hotel comparable to the Hotel de Coronado or Hotel del Monte. However, by 1900 the plans had changed and it was announced the Pacific Improvement Company (P.l.C.) would build a number of villas on the Hope Ranch. The residential community ultimately came, though not under the ownership of the P.l.C.

Hope Ranch has long been known for its recreational facilities. As early as 1829, the lake was a fashionable spot for picnicking by the residents of Santa Barbara. More than once, as an expression of old Santa Barbara hospitality, the lake was rechristened by the mayor in honor of a visiting dignitary. For example, it became “Lake Fenton” in honor of the visiting Governor of New York. Of course, as soon as the dignitary was on the train for home, it reverted to its traditional name “Laguna Blanca.”

The Ranch has been an equestrian center since the Thomas Hope days. His Laguna Blanca course is reputed to be the first track for flat racing in California and, in 1872, the first steeplechase in the state was held there. In 1908, the Pacific Improvement Company announced plans to make Hope Ranch into a “playground of the world,” and thus the Potter Country Club was born. A $10,000 Clubhouse was built on Carosam Road. It was surrounded by a golf course and was the forerunner of the present La Cumbre Golf and Country Club. When the club moved to its present site, the old clubhouse became the Gun Club, used for skeet and trap-shooting. Years ago, the house was converted into a private residence.

In the 1930’s, the Ranch’s equestrian facilities again became noteworthy. It became the home of the DuPont Gold Cup 3-Mile Steeplechase for a number of years, as well as the site of hunter trails, “Hare and Hound” chases and polo matches. The Chase Fields were the original site of the famous Santa Barbara National Dog Show from 1937 to 1962. Today it has become the nation’s largest one-day show, and the site has been moved to various other facilities.

The polo field was the site of the first air flight in Santa Barbara. In 1911, a young Frenchman, Didier Masson, flew a Curtiss biplane from Hope Ranch to the lawn of the Potter Hotel on West Beach. Masson had previously circled the Eiffel Tower and the Statue of Liberty. In 1913, he was shot down while serving as an airborne spy for the Mexican Government during the revolution.

Hope Ranch was also the site of Santa Barbara’s first air show, presented by daredevil Lincoln Beachley, in 1914. A crated biplane arrived by train and was assembled on the shores of Laguna Blanca. Beachley thrilled the crowd by making thirteen consecutive loop-the-loops to break the world record of nine. He lost control, falling in a spin and crashed into an old oak tree. Despite a few cuts and bruises, he was still able to attend the banquet given that evening in his honor at the Potter Hotel.

At the time of the development of the Potter Country Club, roads were laid out and lots were offered for sale. As the area was relatively far from the city of Santa Barbara by horse and buggy, there was little interest in the lots. However, 15 years later, in 1923, Harold Chase purchased the easterly 825 acres of the Ranch, started the Santa Barbara Estates, Inc., and the development began. In 1925, Mr. Chase organized a second syndicate, La Cumbre Estates, which purchased the 1200 acres west of Las Palmas and Roble Drives. With Hope Ranch united under one control again, the installation of roads, utilities and bridle paths, and an increase in water supply were pursued. The first homes in Hope Ranch were built for the directors of the corporation. “Las Terrases” was completed for the Chases in 1925, followed by Peter Cooper Bryce’s “Florestal” and the Wilson and Dickenson homes.

During the years the ranch was owned by Pacific Improvement Company, acres of walnuts were planted, and cattle, hay, grain and lima beans were raised in a profitable operation. A 1915 letter stated that the ranch had been put in charge of Loren Van Home, who later married Kate Stowe. “He did a most excellent job,” the letter continued, “and we had the ranch on a profitable basis. One year we made a net of $25,000 and in another, $15,000. I do not recall that we ever had any losing years in operation.” Loren Van Home and Harold Chase were classmates and fraternity brothers at the University of California, Berkeley, Class of 1912. With a major in agriculture, Van Home’s contribution to the ranch’s growth was significant. Harold Chase frequently joined friends at the ranch for impromptu rodeos and dove shooting. The 2100 acre ranch was closed to the public except along the Toll Road and Potter Hotel golf course. For many years, the ranch was a favorite destination for drives and outings, but in July 1904, someone started a fire which destroyed 22 tons of hay near the old lime kiln and consequently, toll gates were erected. Those with permission paid 50 cents to enter. The road was reopened 20 years later.

In 1904, the first ornamental planting took place, with 360 large palms and a number of pine trees. Later, when Harold Chase had formed Santa Barbara Estates and La Cumbre Estates, some 50,000 trees and shrubs were planted. About 50,000 lemon trees were planted after that, all of which created the park-like atmosphere we enjoy today. The ranch has continued to grow in a carefully planned manner since 1924 when the Hope Ranch Park Homes Association was established.

Today there are 686 residences and building continues at a moderate rate. Properties in Hope Ranch are rapidly escalating in value. With a sense of humor, looking back at advertisements in the early 1900s by the Pacific Improvement Company, we read, “Hope Ranch home and villa sites are being sold at prices ranging from $100 to $2,500 per acre. Terms: One-quarter (25%) cash at time of purchase, balance to be paid within three years at 6% per annum of deferred payments.”

The buyer was also informed that, “In order to conserve the beauty of this property and insure a desirable neighborhood, suitable building restrictions will be imposed. While not excessive, these are the guarantee of such buildings as will be promoting the interests of the property as a whole.”

These restrictions have continued through the years with further implementation by the Santa Barbara County Codes and Zoning Regulations. Vigilant work by the staff and the Architectural Board of Review has ensured that Hope Ranch has remained, and will continue to be, a desirable place to live.

© Copyright 1980 by Santa Barbara Board of Realtors.